It’s now more than 20 years since most of you enrolled in the Agricultural Health Study (AHS). The information
you have provided over the years has led to a greater understanding of the role of agricultural exposures in
health. Many transitions have occurred over these years, both in farming practices and in your own lives. You
have told us how your farm has changed, or that you are no longer farming. Regardless of what you are doing
now, your ongoing participation in the study is invaluable. By remaining involved in the AHS, you play a vital
role in improving the health of future generations.

The AHS team has also gone through a transition. In October, Dr. Michael Alavanja, one of the original leaders
of the study, retired from the National Cancer Institute (NCI). We wish him well. We welcome Dr. Stella
Koutros from the NCI as a new member of the Executive Committee. For more information on AHS scientists,
please visit https://aghealth.nih.gov/about/ec.cc.html.

To learn more about the AHS activities, please visit our website (https://aghealth.nih.gov) or call us at
1-800-4-AGSTUDY (1-800-424-7883). Information on AHS projects that you may be contacted about can be
found on the Ongoing Studies section.

Pesticides and Cancer among AHS Spouses 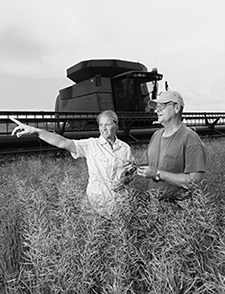 Women who reported using OP insecticides were more likely to develop breast cancer than women who never used these insecticides. In addition, some specific OPs were associated with other cancers:

This is the first comprehensive evaluation of the use of these insecticides among women; it will be important to confirm these findings in other studies.

Direct use of a pesticide is only one way that farming women could be exposed. The study team is evaluating exposure to pesticides by other routes, such as drift from nearby fields, bystander exposure on the farm when pesticides are being applied or mixed by others, and pesticide residues in the home. This additional exposure information will be used in future evaluations of risk.

In the United States, more than 600,000 people receive dialysis or kidney transplants for end-stage kidney disease each year. Diabetes and hypertension are the most common causes of kidney disease, but some evidence from animal studies and case reports suggests that pesticide exposure might play a role. AHS researchers used nationwide data on persons who received dialysis or had a kidney transplant to study the risk of kidney disease in AHS pesticide applicators and their spouses. A total of 320 applicators and 98 wives developed kidney failure since joining the AHS. Most pesticides were not associated with kidney failure, but use of a few specific pesticides was more common among those who developed end-stage disease. Applicators who reported the highest use of the herbicides atrazine, metolachlor, alachlor, paraquat, and pendamethalin, and the insecticide permethrin, had the highest risk of developing kidney disease compared to those who did not report use of these pesticides. In addition, applicators who sought medical care more than once for reasons related to their pesticide use were twice as likely to develop end-stage kidney disease and those who were ever hospitalized for reasons related to pesticide use were three times as likely to develop end-stage kidney disease as those who had not sought such care.

The Agricultural Health Study of Memory and Aging

We are asking 2,500 AHS participants to join the AHS Memory in Aging (AHSMA) study to investigate whether past exposures to pesticides or other farming activities might affect memory. Thanks to your enthusiastic support, since April 2015 we have completed a telephone evaluation of memory with about 1,500 AHS participants. Following this initial survey we are contacting some of the participants to request an in-home visit and blood or saliva samples. By identifying farmingrelated factors that may affect memory this study will aid in developing strategies to help farmers maintain an active and healthy life throughout their later years. We encourage you to participate in the AHS-MA study if you are selected.

Biomarkers of Exposure and Effects in Agriculture (BEEA) Study

Our past studies linking pesticide exposure and disease risk were based on questionnaires and, in some cases, DNA from cheek samples. In our ongoing Biomarkers of Exposure and Effects in Agriculture (BEEA) study, we are collecting blood and urine samples from 1,600 men in the AHS, as well as house dust and questionnaire information. These additional samples and information will be used for a variety of future studies to investigate how pesticides and other agricultural exposures affect different processes in the body, and how these changes influence our risk of developing cancer or other diseases.