We hope you’ve fared well during the continuing COVID-19 pandemic. We thank you for your continued participation and interest in the Agricultural Health Study (AHS). Your involvement in the study since it began almost 30 years ago has enabled us to learn important information about the health of families living on the farm. We also want to thank the more than 32,000 participants who completed our fourth cohort-wide follow-up survey, which is now closed. Your responses are essential to the success of the study and will contribute to ongoing and future research!

Agricultural Pesticide Use and Thyroid Cancer 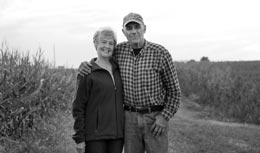 There is growing evidence that some pesticides can affect immune function. In the AHS we have previously identified pesticides associated with diseases related to immune system, such as rheumatoid arthritis and lymphoid cancers, and we wanted to know whether pesticides might also affect susceptibility to infections. Shingles is a painful condition caused by the loss of immune control and symptomatic reactivation of the varicella zoster virus (the same virus that also causes chickenpox). Risk is greater for immunosuppressed individuals and increases with age. As many as 1 in 3 adults may develop shingles in their lifetime. For unknown reasons, and despite the availability of vaccines for chicken pox and shingles, rates have been increasing in recent decades.

In the AHS, we studied over 12,000 farmers who were followed for an average of 12 years and found that developing shingles was associated with increased use of several pesticides. These included four commonly used insecticides (malathion, carbaryl, diazinon, and lindane), two fumigants (methyl bromide and carbon tetrachloride), and two herbicides (2,4-D and trifluralin). These findings support the idea that certain pesticides may influence immune functions essential for controlling latent varicella zoster infection, similar to the effects of aging or use of immunosuppressive medications, resulting in a greater risk of shingles. If these results are confirmed in other studies, these findings may have implications for other types of infections and vaccine effectiveness.

Agricultural Pesticide Use, Kidney Cancer, and Other Kidney Disease

In some previous studies, agricultural work and occupational pesticide use have been associated with increased rates of renal cell carcinoma (RCC), the most common form of kidney cancer. However, few of those studies had investigated links to specific pesticides. We evaluated associations with 38 pesticides that were relatively commonly used at enrollment among pesticide applicators in the AHS, including 308 individuals who developed RCC during follow-up until 2015. We found that the highest users of the herbicide 2,4,5-T were approximately three times as likely to develop RCC compared with those who never used this pesticide. Use of 2,4,5-T was banned in the U.S. in the mid- 1980s due to its contamination with dioxin (TCDD), a known cause of cancer. Because RCC can take many years to develop, we also looked at associations with past pesticide use (up to 20 years before diagnosis). In these analyses, we saw increased rates of RCC among applicators with the highest numbers of days of use for chlorpyrifos, chlordane, cyanazine, paraquat and atrazine. Atrazine, an herbicide that is still widely used, has been associated with increased rates of end-stage kidney disease among pesticide applicators in the AHS and, more recently, with diminished kidney function. We are continuing to evaluate how certain pesticides and other agricultural exposures might influence the development of kidney disease and kidney cancer.

We will soon invite adult children of AHS participants to enroll in a new study focused on how growing up on a farm may impact health in early adulthood and beyond. We will ask this group to answer online surveys about their health and childhood activities, including activities on the farm. You may hear about this from your children!