The Agricultural Health Study (AHS) is a prospective study of cancer and other health outcomes in a cohort of licensed pesticide applicators and their spouses from Iowa and North Carolina. The AHS began in 1993 with the goal of answering important questions about how agricultural, lifestyle and genetic factors affect the health of farming populations. The Agricultural Health Study is funded by the National Cancer Institute and the National Institute of Environmental Health Sciences in collaboration with the United States Environmental Protection Agency. The National Institute for Occupational Safety and Health has previously played an important role in the study.

More than 89,000 farmers and their spouses in Iowa and North Carolina have participated in the study. Their participation has provided, and continues to provide, the data that researchers need to help the current and future generations of farmers and their families live healthier lives.

Phases of the Study

TThe study began by collecting baseline information from participants when they enrolled (1993-1997). Follow-up telephone interviews were conducted in the second (1999-2003) and third phases (2005-2010) of the study. The Phase 2 interview was completed by 64% of private applicators, 59% of commercial applicators, and 74% of spouses. Participants provided updated information on farming practices, lifestyle, and health and were asked to complete a dietary questionnaire and provide a sample of cheek cells as a source of DNA. The Phase 3 interview also updated information on farming practices, lifestyle, and health. It was completed by 46% of enrolled private applicators and 62% of enrolled spouses. All participants who were eligible to participate at Phase 3 were asked to provide information updating health and farming status in Phase 4. Participants completed the questionnaires either by mail, telephone or through the Internet; for the first time, next-of-kin were able to provide health update information for those who could not complete the questionnaires themselves. Data collection began in 2013 and ended 2015; 61% of eligible cohort members (applicators and spouses) participated. A new follow-up effort began in 2019 and is expected to be completed in 2021. Eligible participants (or next of kin) are being asked to complete a questionnaire updating farming status and health outcomes through a web survey, mail survey or phone interview. 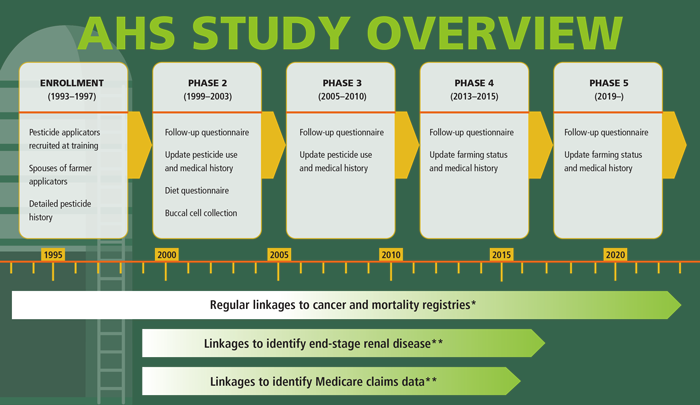 Findings from the AHS are shared in the scientific literature, through newsletters, and other publications.

In addition to the main study, the AHS encourages researchers to conduct add-on studies that focus on specific related health issues. These studies are designed to leverage the data collected from participants to ask important questions about the health of farm families. Examples of current and past studies can be found on the Add-on Studies page.